PITCH DIAMTER: The theoretical diametrical plane, which passes through a thread at the point where the width of the thread tooth and groove are equal.

FLANKS: The sides of the thread form or groove, connecting the crest and the root.

FLANK ANGLE: The angle between the flank and a line perpendicular to the axis of the thread.  Also referred to as half angle or lead angle.  Some exceptions to this definition might be found, such as tapered thread flank angles measured perpendicular to the taper and should be noted.

INCLUDED ANGLE: Total of the two flank angles of a thread form. 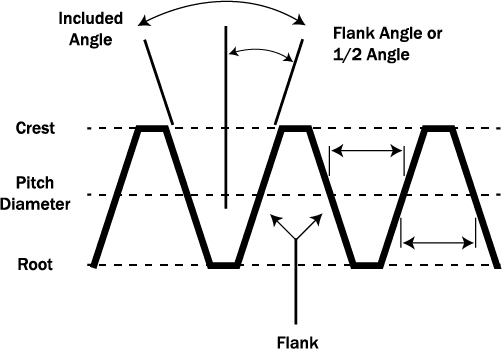